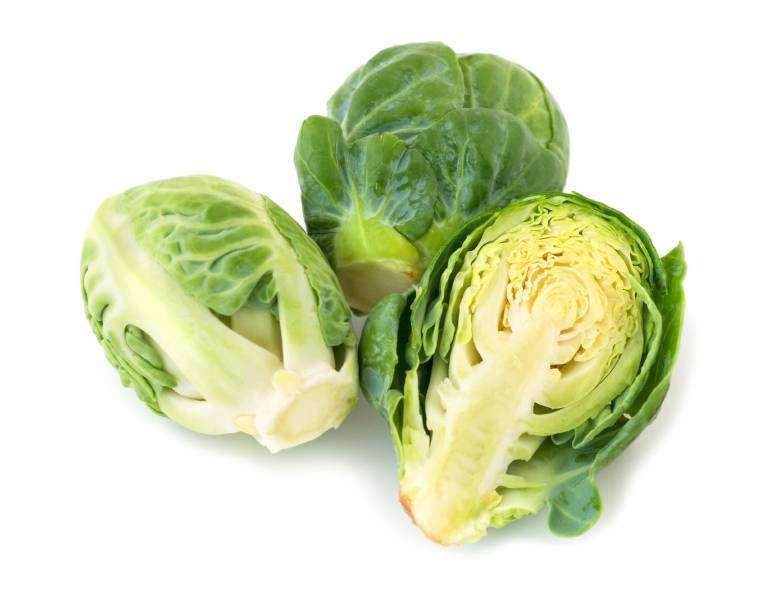 Brussels sprouts are members of the Brassicaceae, a large family of plants that includes mustards, cabbages, broccoli, turnips, cresses, and their many relatives.

Given that Brussels sprouts are members of the cabbage family, it’s not surprising that their small leafy green buds resemble miniature cabbages. While this infamous vegetable is associated with a strong smell, this results from overcooking. When prepared properly, Brussels sprouts have a taste that is both sweet and savory.

Brussels sprouts were grown as early as the 13th century in what is now Belgium. Production in the U.S. began around 1800, when French settlers brought Brussels sprouts to Louisiana. The first plantings began in California’s Central Coast in the early 1920s. Currently there are several thousand acres planted in this coastal area that supplies nearly all of the country’s Brussels sprouts needs.

Brussels sprout production is the U.S. is primarily for the frozen food market (80% to 85%), with the remainder for fresh consumption.

Half a cup of cooked Brussels sprouts has just 28 calories, 6 grams of carbohydrates of which 2 grams are from fiber. Brussels sprouts are one of the best vegetable protein sources with about 20 percent of its calories coming from protein. A half cup serving provides 2 grams of protein.

Brussels sprouts are an excellent source of vitamin C and vitamin K, providing 81% and 137% of daily values, respectively. This vegetable is also a good source of potassium, providing 247 mg per serving.

Brussels sprouts are rich in a group of phytonutrients called glucosinolates. In the body, glucosinolates are transformed into other chemical compounds called isothiocyanates and indoles. These substances are the starter material for a number of cancer-protective substances. In fact, many studies have shown that higher consumption of Brassica vegetables is linked to reduced cancer risk.

Although available year-round, the peak season for Brussels sprouts is from September to mid-February.

When selecting, choose small, firm, compact heads with tight fitting leaves that are bright green in color. Avoid yellow or wilted leaves, large puffy heads and a strong odor. Avoid those with black spots and holes in the leaves – this may indicate that they have aphids residing within. When possible, buy sprouts still on the stalk, as this indicates freshness.

Do not wash Brussels sprouts until you are ready to use them. Wash them well under running water or soak them in a bowl of water to remove any insects that may reside in the inner leaves.

To freeze, blanch Brussels sprouts first for three to five minutes. They will keep in the freezer for up to one year. Stored in a plastic bag, they can be kept for 10 days in the refrigerator.

If Brussels sprouts are sold individually, choose those of equal size to ensure that they will cook evenly.

When preparing Brussels sprouts, it is extremely important not to overcook them. Not only do they lose their nutritional value and taste, but they will begin to emit the unpleasant sulfur smell associated with overcooked cruciferous vegetables – the reason many people profess to dislike Brussels sprouts.

The simplest way to prepare Brussels sprouts is by steaming them. Depending on their size, steaming can take about 5 to 8 minutes. Once tender, drain the water and then toss the Brussels sprouts with a bit of olive oil, pepper, salt and toasted pine nuts.

For a simple, savory take on Brussels sprouts, sauté with garlic and onion. Add vinegar and toss so Brussels sprouts are evenly coated or sprinkle with grated Parmesan cheese.

If sautéing is not your forte, Brussels sprouts can be easily roasted. For an incredibly simple side dish, toss Brussels sprouts with a small amount of olive oil before baking. For something with a little more flavor, place Brussels sprouts, olive oil, bread crumbs, and a dash of salt and pepper in a large re-sealable plastic bag, and shake to coat. Simply roast Brussels sprouts at 400 degrees for 40 minutes, or until dark brown.

For a healthy side dish or salad, combine quartered cooked Brussels sprouts with sliced red onions, walnuts, and your favorite mild tasting cheese such as a goat cheese or feta. Toss with olive oil and balsamic vinegar.

Brussels sprouts are very popular in Great Britain — they grow about six times as many of them as the U.S.

8 Tips to Keep Your Home Green