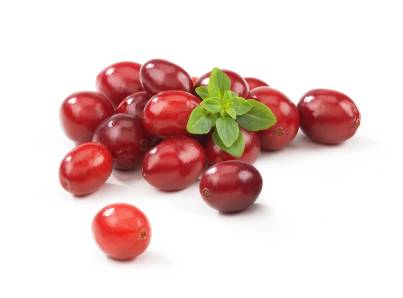 An evergreen dwarf shrub that grows in acidic soil in the Northern Hemisphere, cranberries are related to bilberries, blueberries and huckleberries.  Cranberries are one of a handful of fruits including Concord grapes and blueberries that are native to North America.

Cranberries were originally called craneberries because their pink blossoms resembled that of a crane.  Early settlers first learned of the cranberry from natives who mixed this fruit to preserve meat, applied it as a poultice to heal wounds and dyed cloth with its red color.

Although four major varieties exist, the American cranberry, which is larger than the wild or European version, is most commonly found in stores across the country.  While growing, the berry starts out white but when ripened, it turns into a deep crimson color.  If you’ve ever tried a raw cranberry, it has a sour, bitter taste.

Wisconsin is the largest producer of cranberries followed by Massachusetts but other states include Maine, Michigan, Minnesota, New Jersey, Oregon, and Washington.

Raw cranberries are low in calories (1 cup has 51 calories) and a good source of fiber (13 grams of carbohydrate and 5 grams of fiber per cup), but their bitter taste makes them unpleasant to eat raw like other berries.

To make the juice more palatable, cranberry juice is sweetened with sugar or mixed with other juices like apple, raspberry, strawberry and tangerine.  This increases the calorie content – an 8 oz. glass of cranberry juice cocktail has 137 calories and 30 grams of sugar, so limit your intake.

Dried cranberries, like other dried fruits, are also concentrated in sugar.  A third of a cup of sweetened, dried cranberries has 123 calories and 26 grams of sugar.

Cranberries are a moderate source of vitamin C but their health benefits are associated with their polyphenol antioxidants (cyanidin, peonidin and quercetin) that give this berry its beautiful deep red color.  According to the USDA’s list of plant foods most commonly consumed, cranberries have one of the highest ORAC (Oxygen Radical Absorbance Capacity) scores – a measure of antioxidant activity.

The phytochemicals in cranberries are associated with cardiovascular and immune system health.  Preliminary research has also found that the compounds in cranberries may have anti-cancer benefits.

The antioxidants found in cranberries have been shown to prevent the oxidation of LDL or “bad” cholesterol and decrease levels of total cholesterol.  Drinking an 8-ounce glass of cranberry juice may also help elevate HDL or “good” cholesterol levels.

Plant chemicals in cranberry juice have anti-adhesion properties which inhibits E. coli bacterial infections from developing in the urinary tract.  These chemicals also inhibit the formation of plaque by pathogens in the mouth thereby preventing tooth decay.

The acidity level of cranberries is associated with quinic acid.  When consumed, the urine becomes slightly acidic and helps to prevent calcium and phosphate from joining, preventing the formation of kidney stones.

During late September and early October, cranberries are harvested by flooding the bogs in which they grow.  The berries float to the surface and are collected for processing.  Fresh cranberries, which account for only 5% of total production, are available for a short period, typically October through December.

When selecting fresh berries, look for those that are shiny and firm.  Avoid shriveled berries or those with brown spots.  The berry can range in color from bright light red to dark red.

Take advantage of fresh cranberries by making your own cranberry sauce. It’s easy to make, tastes much better than the canned version and can easily be frozen for later use.  Also, you can reduce the sugar content by adding thin slices of orange (rind included) while the berries are cooking.  Only cook the berries until they “pop” as overcooking makes them bitter.

Dried cranberries, like raisins and other dried fruits, can be added to oatmeal, cereal, baked goods, desserts, and salads.  But, keep in mind, that the sugar content is much higher than the fresh fruit.

Small pockets of air inside the fruit cause cranberries to bounce.  It’s also what makes the berries float in water, allowing flooding of bogs to harvest the bright, little berries. 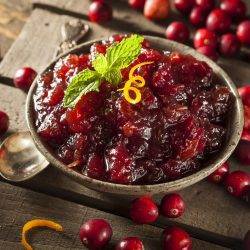