But, are sit-down meals at smaller chains and independent restaurants any different?  Not so, according to a new study published in the Journal of the American Medical Association.

Researchers at Tufts University analyzed the calorie content of 157 meals served at small-chain (fewer than 20 eateries) and independent restaurants, which collectively make up approximately 50% of the nation’s restaurants and are exempt from the new federal rules requiring that calorie information be posted.

“The average meal provided 66% of a day’s calories for the average individual.”

They measured the heat given off as calories when the food is burned up, a method aptly named “bomb calorimetry.”  The types of food studied included Italian, Greek, American, Mexican, Indian, Japanese, Thai, Vietnamese, and Chinese.

The average lunch or dinner meal contained 1,327 calories – 17% more than similar items at larger chains.  More than 90% of the small-chain restaurant meals contained more than a third of daily calorie requirements.  About 10% exceeded the FDA’s daily caloric recommendation of 2,000 calories per day.  These figures were exclusive of drinks, appetizers, or desserts.  The average meal provided 66% of a day’s calories for the average individual.

“Given that an imbalance between energy intake and energy expenditure of only 100 calories per day can lead to a weight gain of between six and fifteen pounds per year, our findings suggest that routine reporting of meal calorie content by all restaurants, not just large chains, would encourage individuals to make informed choices about their diet and would discourage restaurants from offering unhealthy portions,” states study author Lorien Urban, Ph.D., postdoctoral scholar in the Energy Metabolism Laboratory at the USDA HNRCA.

So then would having calorie information posted help people make better food choices, even at these restaurants?

Not necessarily.  Another study presented at the Experimental Biology 2013 Conference in Boston by researchers from Texas Christian University (TCU) revealed that showing how much brisk walking is required to burn the calories of a menu item was more effective than showing calorie information.

Brisk walking was chosen, as it is an activity most people can relate to and engage in.  The menus were identical with respect to food and beverage options, which included burgers, chicken sandwiches, chicken tenders, salad, fries, desserts, fountain beverages, and water.

As the first study to look at the effects of the amount of exercise needed to burn food calories on the calories ordered and consumed, it “suggests there are benefits to displaying exercise minutes to a group of young men and women,” says Meena Shah, clinical associate professor of kinesiology at TCU.

I think if smaller restaurants were not exempt from the new calorie posting requirements, Americans would become much more aware of how much they’re actually eating.

The unfortunate reality is that unless you shop, prepare, and eat meals at home – good luck trying not to overeat and manage your weight.

Even at our gym, which is supposed to be focused on health, I have repeatedly requested management to cut down the portion size of the meals offered or at least offer half portions.  I hardly ever order food there because the portions are too large.

The expectation that men and women should be eating the same portion size is unsound.  At our gym, I suspect that the average salad is pushing 900 to 1,000 calories.  Most adult women, who don’t exercise, probably only need about 1,400 calories a day to maintain their weight.  That means for an average meal, they should be looking at around 450 calories.

Preparing meals at home can cut calorie consumption by 20-35% because you are more likely to serve yourself a smaller, more realistic portion size.  Of course, eating at home all the time may be unrealistic for today’s lifestyle. Still, there are things you can do to control calorie consumption despite these challenges.

When eating out, order half portions or ask the server to pack up half of your meal before it even hits your plate.  Also, watch or skip calorie-laden sauces and dressings, and forego appetizers, desserts, and sugary beverages.  Check out this illustration to determine the appropriate portion size for foods and beverages.

But as the second study shows, calorie information without context is useless.  Indicating the amount of exercise needed to work off a meal is a great idea to help us understand what all these numbers actually mean.  For example, to work off a quarter-pound double cheeseburger, a woman needs to walk briskly for approximately two hours.  Do you really want that Starbuck’s Venti Frappuccino if it means you have to walk for 90 minutes? 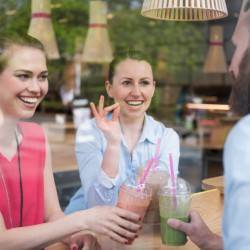 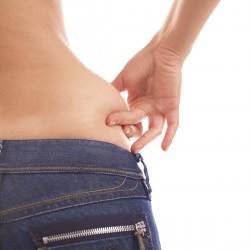