In men, his wife’s education is more important in determining his risk of dying over the next decade than his own education. This according to a new study published online this week in the Journal of Epidemiology and Community Health.

Studies have examined the relationship of education, occupation and income on one’s own mortality. However, this study was the first of its kind to measure the impact of a partners’ educational level, occupational class, social status and income to mortality.

The study used 1990 census data from over 1.5 million employed Swedish adults, 30 to 59 years old who were living with a partner. Data was collected on participants for over a decade. During the study, the number of deaths totaled more than 52,000.

The study first examined the risk of mortality among individuals based on their own socioeconomic factors. In men, low educational level and low income was associated with a higher mortality risk. Men with just a compulsory education and the lowest level of income were 1.24 times and 1.56 times more likely to die, respectively.

In women, low educational level and low social status but not income was associated with a higher mortality risk. Women with just a compulsory education and the lowest social status were 1.32 times and 1.25 times more likely to die, respectively.

Mortality risk changed when a partners’ socioeconomic position was taken into consideration. But the changes were different between men and women.

In men, increased mortality risk was most strongly associated with their partners’ educational level. However, a woman’s income from work did not have a significant effect on her partner’s mortality risk. Men whose partner had advanced education cut their risk of dying in half than if their partner had just a compulsory education (13% vs. 25%). By partnering with an educated woman, less educated men working in more unskilled/skilled manual jobs also reduced their mortality risk.

In women, a slightly different picture emerged. Increased mortality risk was more strongly with their partners’ social class and income. Women whose partner was an unskilled laborer or who belonged to the lowest income class were about 1.15 times more likely to die than if her partner was in a managerial occupation or in the highest income level, respectively. A man’s educational level did not have a significant effect on his partner’s mortality risk.

“The importance of women’s education for both women’s and men’s mortality is a central finding from the present analyses,” said lead study authors Robert Erikson and Jenny Torssander. They concluded, “If highly educated women more easily understand the plethora of advice about healthy lifestyles, women’s education could have a substantial influence on the health and mortality of the partner.”

Given that women tend to be the healthcare decision makers for the family, the responsibility of understanding nutritional and medical issues generally fall on her shoulders.   This study’s implication is that more highly educated women can make better health decisions for herself and her partner.

The key message is that learning about nutrition and health allows a person to make better decisions. An advanced education is one avenue but many others exist. Reading articles on health oriented websites like The Wellness Center will certainly help. In addition, government funded organizations like the National Institutes of Health and the Centers for Disease Control publish a tremendous amount of information both online and offline. Non-profit organizations like the American Cancer Society also provide volumes of easy-to-read information.

The good news is that the health and nutrition field is not that complicated. It does not require an advanced education to understand the information. But, it requires an interest in learning and a dedication to apply the knowledge.

Acne and Diet – Myth or Must (INFOGRAPHIC) 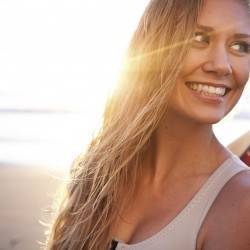 Your Guide to Healthy Summer Hair