Women who snack during mid-morning versus the afternoon are less likely to lose weight, according to a new study published in the Journal of the American Dietetic Association.

Snacking can be a useful tool for those wishing to lose weight.  A small, healthy snack eaten in the late afternoon can quell hunger pains before dinner.  By not becoming too hungry in between meals, a dieter can reduce the chance of overeating.  But, snacking can also sabotage a diet especially if the snack is laden with sugar, fat and calories.

In the present study, researchers examined the association of weight loss with not only the frequency but the timing and quality of snacks.

To conduct their analysis, researchers studied 123 overweight or obese (BMI 31.1) post-menopausal women involved in a year-long dietary weight-loss intervention. These women were part of a larger study that tested the effects of nutrition and exercise in breast cancer.  Women enrolled in the diet or the diet plus exercise portion of the study from 2007 to 2008 were used for the current study.

Participants were on average 58 years old and primarily white (84%).  More than two-thirds were college graduates, more than half employed full-time and almost sixty percent married.

The women maintained a daily food journal for 6 months or until they reached their weight loss goal (10% reduction in weight).  Meal pattern intake was measured at 12 months using a simple meal pattern grid.  The women indicated what they ate and drank during a typical 24-hour weekday, noting the time and type of meal.

Snacking was popular among the participants with virtually all reporting one or more snacks a day (97%). However, a higher proportion of mid-morning snackers reported having more than one snack a day (95.7%) vs afternoon (82.8%) and evening (80.6%) snackers.

Women who reported snacking mid-morning (10:30A to 11:29A) lost just 7% of their original weight compared to11.4% for non mid-morning snackers.

“We think this finding may not relate necessarily to the time of day one snacks, but rather to the short interval between breakfast and lunch, “ said study researcher Anne McTieman, M.D.  She continued, “Mid-morning snacking therefore might be a reflection of recreational or mindless eating habits rather than eating to satisfy true hunger.”

As this study showed, snacking patterns may reflect unhealthy eating habits which determine a dieter’s success in losing weight.

For example, in this study most mid-morning snackers reported eating both breakfast and lunch as well as eating more than one snack a day.  This indicates that these women had too many eating occasions.

An increase in eating occasions is reflected in national health statistics.  Compared with the late 1970s, the average time between meals has contracted by 1 hour.  With snacks and sugary beverages available everywhere – from gas stations to Target – many of us are influenced to eat due to situational cues as opposed to true feelings of hunger.

Just because you’re dieting doesn’t mean that you have to feel hungry.  Provided you make healthy choices, snacking can be an integral part of a weight-loss or weight maintenance program.  Excellent snack choices include fruits, vegetables and fiber rich foods. 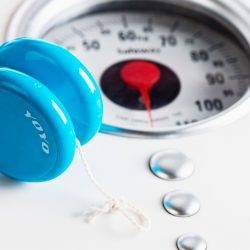 How to Prevent Gaining Weight After Weight Loss