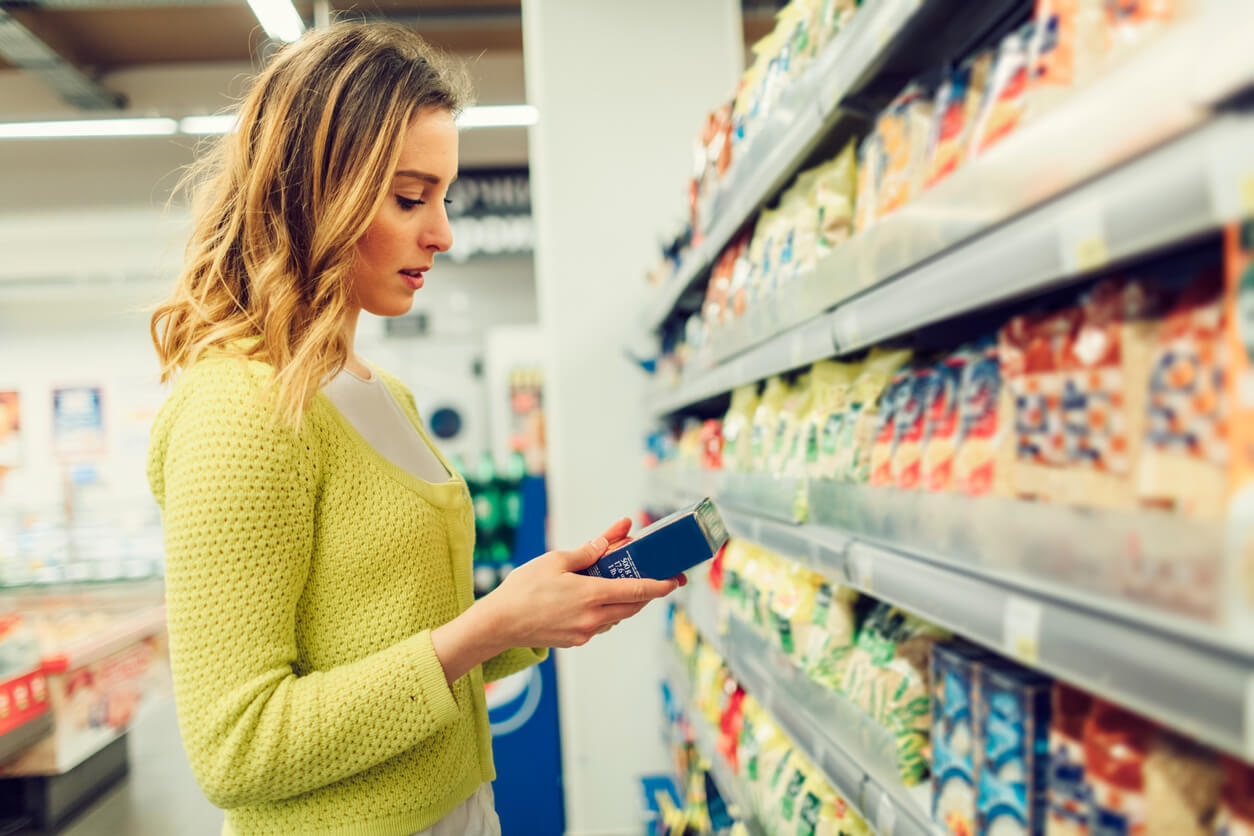 Late last year, VitaMedica started rolling out these labeling changes along with a new and refreshed packaging design.  Even though the packaging and the Supplement Facts may look different, the products are still the same.

This article reviews the recent updates mandated by FDA on food and supplement nutrition labels. Understanding these changes is important so that you can continue to make healthy choices whether considering a packaged food or a nutritional supplement.

Prior to 1994, food labels provided limited nutritional information.  Mandatory information was required only on foods making a nutrition claim or those fortified with vitamins, minerals or protein.  However, with the passage of the Nutrition Labeling and Education Act (NLEA) in 1990, the FDA was granted authority to require nutrition labeling on food packages.  Another purpose of the legislation was to ensure that all nutrient content claims and health claims were consistent with agency regulations.

Since the Nutrition Facts made its debut in 1994, only one update has occurred when in 2006, Trans Fat was added under Total Fat.  The most recent round of labeling updates, which were proposed by FDA in 2016, were intended to better reflect how food is more commonly consumed and to align with the body of scientific evidence regarding nutrition, health and disease.  By 2020, all food and supplement manufacturers had to be compliant with the label changes.

Nutrition Facts (food products) and Supplement Facts (dietary supplements) are the focus of the new labeling changes.  Key areas that have been updated include: Servings Per Container, Calories; Total Fat and Saturated Fat; Total Carbohydrate, Dietary Fiber, Total Sugars and Added Sugars.  Virtually all of the Daily Values (DVs) have also been updated. 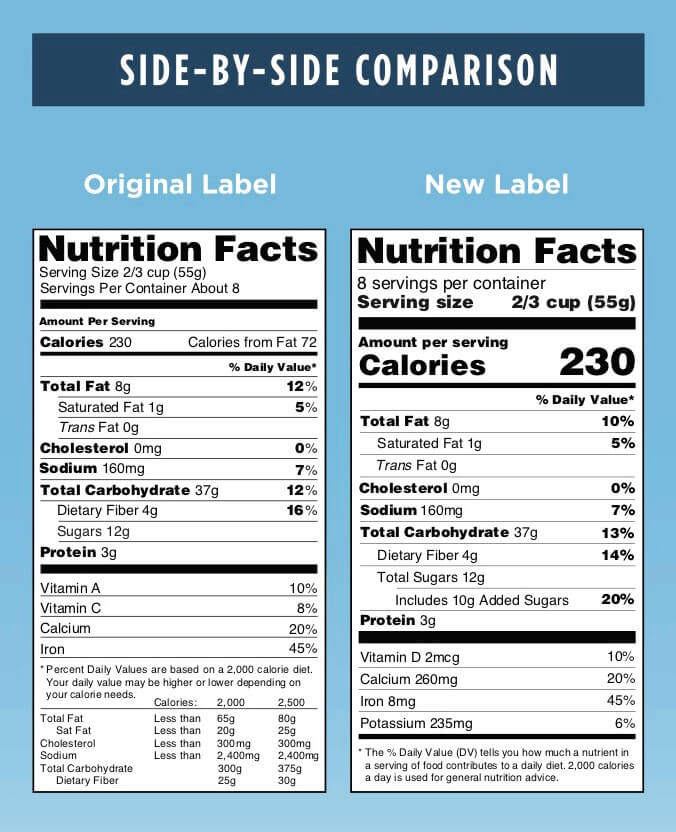 Servings per container is now listed first and Serving Size is more prominent, in bold lettering.

The number of Calories per serving is much more prominent, in large, bold lettering.  Packaged foods which are typically consumed in one sitting (e.g., “single-serve” juice bottle), must now show calories per serving and per container, in a dual column format.  Calories from Fat is no longer provided given that the type of fat consumed (saturated, unsaturated or trans fat) is more important than the total amount.

The Daily Value for Total Fat has increased from 65g to 78g.  Saturated Fat remains at 20 g per day.  Trans Fat still does not have a Daily Value.

The Daily Value for Total Carbohydrate was reduced from 300g to 275g.  Total Sugars now includes a sub-total for Added Sugars.

Dietary Fiber – With most Americans falling short on their intake of fiber, and with research indicating the importance of fiber to digestive and overall health, the recommended daily intake has been increased from 25g to 28g per day.

Total Sugars – Includes sugars naturally present in many nutritious foods and beverages, such as sugar in milk and fruit as well as any Added Sugars that may be present in the product. No Daily Reference Value has been established for total sugars because no recommendation has been made for the total amount to eat in a day.

Added Sugars – Includes sugars that are added during the processing of foods (such as sucrose or dextrose), foods packaged as sweeteners (such as table sugar), sugars from syrups and honey, and sugars from concentrated fruit or vegetable juices.  The new recommended intake is just 50g per day (200 calories) or 10% of total caloric intake.

The Daily Reference Value for Protein remains at 50g.

The recommended daily intake for cholesterol remains at 300 mg.  For sodium, the daily limit was reduced from 2,400 mg to 2,300 mg.

Just below macronutrients, four micronutrients are listed:  Vitamin D, calcium, potassium and iron.  Given their important role in health, these nutrients are highlighted in the Nutrition Facts panel.  Studies consistently show that most Americans do not get enough Vitamin D.  Potassium is found primarily in dark leafy greens, and dietary surveys consistently show that most adults and teens are not getting enough of these nutrient dense vegetables.  In general, Americans consume too much sodium (from packaged foods) and not enough potassium (from vegetables).  Removed from the list was Vitamin A and Vitamin C as most Americans get enough of these nutrients through diet.

NUTRIENTS TO GET LESS OF/MORE OF

The Nutrients to Get Less Of/More Of is based on ongoing consumer food surveys such as National Health and Nutrition Examination Study (NHANES), the current body of nutrition science and consumer studies.  This nutritional advice is often incorporated into the Dietary Guidelines for Americans which are issued every 5 years by the United States Department of Agriculture and Health & Human Services.  The 2020-2025 Guidelines were issued in December 2020.

Nutrients to Get Less of

Saturated Fat, Sodium, and Added Sugars are nutrients associated with adverse health effects – and Americans generally consume too much of them, according to the recommended limits for these nutrients. They are identified as nutrients to get less of.

Eating too much saturated fat and sodium, for example, is associated with an increased risk of developing some health conditions, like cardiovascular disease and high blood pressure. Consuming too much added sugars can make it hard to meet important nutrient needs while staying within calorie limits.

Highlighting the amount of Added Sugars on the Nutrition Facts is one of the most important changes to the new nutrition labeling.  The body of evidence is growing that Added Sugars is a major contributor to overweight and obesity in developed nations.  Added Sugars are pervasive in the U.S. diet, with over 40% of intake from sweetened beverages (e.g., soda, sports drinks, energy drinks, fruit drinks) and sweetened coffees and teas.

Nutrients to Get More of

Dietary Fiber, Vitamin D, Calcium, Iron and Potassium are nutrients that Americans generally do not get the recommended amount of.  They are identified as nutrients to get more of.  Eating a diet high in dietary fiber can increase the frequency of bowel movements, lower blood glucose and cholesterol levels, and reduce calorie intake. Diets higher in vitamin D, calcium, iron, and potassium can reduce the risk of developing osteoporosis, anemia, and high blood pressure.

With the RDI changing for virtually every micronutrient, the Supplement Facts Panel under the % Daily Values will look very different even if the formulation has not changed.

Here is an example for VitaMedica’s Clinical Support Morning Formula (click on image to enlarge): 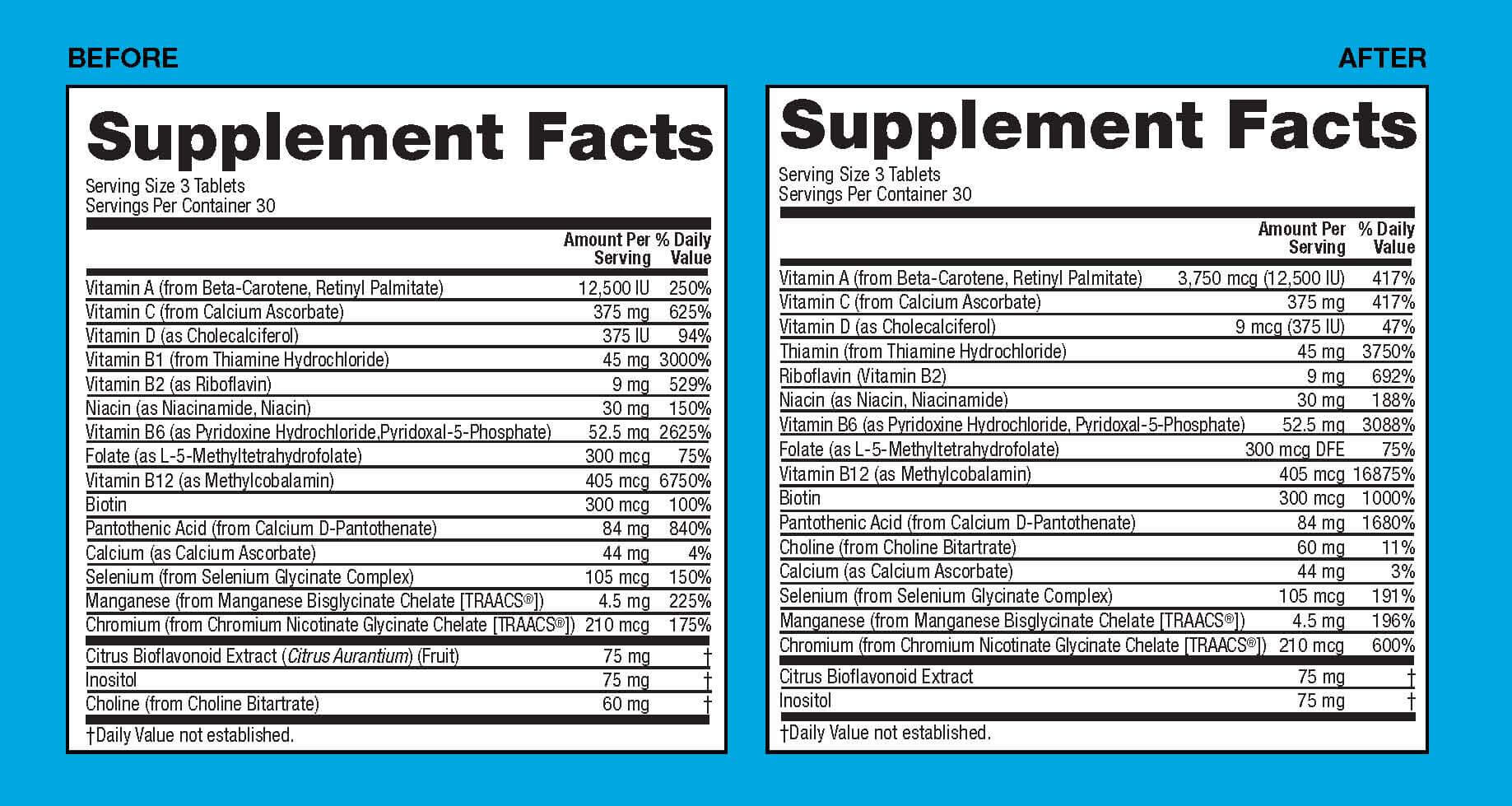 Clinical Support Morning is formulated with 375 mg of Vitamin C.  The Daily Value for Vitamin C increased from 60 mg to 90 mg.  Previously, this supplement provided 625% of Daily Values; now it provides 417%.

Clinical Support Morning is formulated with 12,500 IUs of Vitamin A.  The Daily Value for Vitamin A decreased from 5,000 IUs to 3,000 IUs.  Previously, this supplement provided 250% of Daily Values; now it provides 417%.

New Units of Measure for 4 Vitamins

For four vitamins, not only has the Daily Value been updated, but the units of measure have been changed from International Units (IUs) to metric units:

To ease the transition, all VitaMedica products include both the weight and IU unit of measurement.  Using the Clinical Support Morning example above:

– Vitamin E – this nutrient is not included in the formulation

To help you convert from the previous value to the updated equivalent, refer to this Revised Units of Measure Chart.

The updates to nutrition labeling were intended to make it easier to choose healthier foods.  And, while most of these changes hit the mark, the updates to the % Daily Values and the revised units of measure can be somewhat confusing.  This is understandable.  If you have any questions about these changes, please be sure to contact one of our nutrition experts.  Call us at 888-367-8605 or email us at:  [email protected]

What Doctors Won’t Tell You About Acid Reflux Drugs