Only 12% of Midlife Women Satisfied With Body Size | VitaMedica

Women tend to be hypercritical about their appearance, especially when it comes to their bodies.  Sure, being unhappy with body size is common across all ages and genders, but by the time we reach midlife, does how we view ourselves change?  Or are we still unhappy about the way we look?

According to a recent study by researchers at the University of North Carolina (UNC) at Chapel Hill published in the Journal of Women & Aging, just 12.2% of women at midlife are satisfied with their body size.

“Midlife women satisfied with their body size seem to have made a conscious effort to achieve and sustain this satisfaction.”

Using a sample of nearly 1,800 U.S. women aged 50 years or greater from the Gender and Body Image (GABI) Study, researchers had participants report body size satisfaction based on a silhouette system.

Satisfied women were also unlikely to exhibit core eating disorder symptoms such as binge eating or purging.  They also checked their bodies far less frequently, but both groups of women weighed themselves often, with 38% of satisfied women and 40.2% of dissatisfied women reporting this behavior.

In addition, fewer satisfied women were trying to lose weight at the time of the study and fewer of them reported dieting in the 5 years prior to the study.  Instead, they reported exercising for more hours per week than women dissatisfied with their body size.

Being satisfied with body size did not equate to complete satisfaction with their appearance, however.  Many of the satisfied women reported being unhappy with other features, with particular concern expressed for the stomach (56.2%), face (53.8%) and skin (78.8%).  Almost half stated they would be unhappy if they gained five pounds or more.

Still, appearance-altering behaviors such as cosmetic surgery, the use of Botox and other anti-aging products, and the use of hair color remained similar in both groups.

Researchers note that these results show satisfaction may not come easily.  Midlife women satisfied with their body size seem to have made a conscious effort to achieve and sustain this satisfaction.

Study author Cynthia M. Bulik, PhD, director of the UNC Center of Excellence for Eating Disorders, distinguished professor in the UNC School of Medicine, and professor in the UNC Gilling School of Global Public Health said the findings “underscore the need for a multifaceted approach to studying and assessing body image in women as they mature, as their bodies undergo constant age-related change.”

It’s no secret that most things in life that are worth pursuing require effort.  This seems particularly true for women who want to feel good about themselves and their body.  Emotional eating, anti-depressant use, and a whole range of other panaceas are all used to help us “feel good,” but research has shown time and time again that happiness and health are irrefutably linked.

Sure, there’s no way to stop the effects of time, but finding a balance of healthy eating habits, exercising, and watching our weight is the best way to be happy about our bodies, no matter our age. 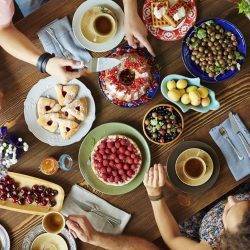