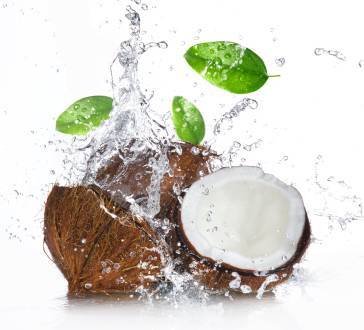 It’s a clean, potable beverage for many people around the world, one recommended by the World Health Organization for treatment of dehydration, and since it’s sterile, it’s even been delivered intravenously.  What is this miracle elixir?    It’s a drink you’ve been seeing pop up everywhere lately – coconut water.

But when it comes to this trendy new drink, everyone seems to have three key questions. First, what is coconut water? Next, what are its benefits? And finally, is it a more healthful alternative to water and sports drinks?

What Is Coconut Water?

Coconut water is the clear liquid inside young coconuts.  Technically, this makes coconut water a juice, not a flavored water drink.  However, compared to many other juices, it has fewer calories and carbohydrates.  It consists of about 94% water, and it is richer in potassium, sodium, magnesium, and calcium than most juices; it also contains electrolytes, antioxidants, plant hormones, enzymes, and amino acids.

Fans say it has a lightly sweet, nutty flavor, making it a popular drink in many tropical areas including Hawaii and the Pacific Islands, the Caribbean, Southeast Asia, Brazil, India, and Africa.

How Is It Different from Coconut Milk?

Coconut water is different from coconut milk, which is a white liquid emulsion of the meat and juice of the coconut.  Compared to coconut water, coconut milk is high in both calories and fat, especially saturated fat.  It also has a creamier consistency and a more pronounced coconut flavor, but because of these qualities, it is more frequently used for cooking or as a mix-in for smoothies and other drinks rather than as a stand-alone beverage.

Coconut milk has 445 calories per one cup serving, with a whopping 403 of the calories coming from fat.  It has 43g of saturated fat, the bad kind of fat that raises LDL cholesterol, 6g of carbohydrate, and 5g of protein.  It also has 29mg of sodium, about 1% of the recommended daily value (DV).  Coconut milk is an excellent source of a wide range of minerals including manganese, iron, magnesium, copper and phosphorous.

Unlike coconut milk, coconut water has only about 45 calories per one cup serving and is nearly fat-free, with just 0.4 grams of saturated fat per cup.  It also contains 9g of carbohydrate, 3 of which come in the form of dietary fiber, and 2g of protein.  It has an estimated glycemic load of three, meaning it will not cause a spike in blood sugar.

Be careful, however, and read the nutritional label for serving sizes and to check for added juices or flavorings, both of which are a source of extra calories.

Coconut water is rich in minerals and electrolytes, compounds used by cells to carry electrical impulses.

Sodium.  There are about 250mg of sodium per cup in coconut water, about 11% DV.  Sodium is an electrolyte, and it is one aspect of what makes coconut water hydrating, since it replaces the sodium lost through sweat.  However, given that most Americans consume far too much sodium (average of 3,500 mg while the target is 1,000 mg), this represents a significant amount.  While hard core athletes need to replace sodium lost during prolonged sweating, most adults are not exercising hard enough to warrant replace lost stores.

Potassium.  Coconut water is rich in the electrolyte potassium, with 600mg or 17% DV, which adds up to more than you would get by eating a medium-sized banana.  In fact, coconut water has more potassium than most sports drinks.  Potassium promotes a healthy nervous system and regular heartbeat, and it also helps regulate muscle activity to prevent cramping and fatigue.  Individuals who suffer from kidney disease or other conditions that limit potassium processing by the body should avoid coconut water.

Magnesium.  Another electrolyte found in coconut water is magnesium, and it has 60mg or 15% DV per cup.  Magnesium helps with metabolizing proteins, carbohydrates, and fats, supports the immune system, helps maintain bone mineral density, and helps convert blood sugar into energy.  In addition, studies have shown a link between high magnesium intake and lower blood pressure.

Riboflavin.  Also known as vitamin B2, one cup of coconut water provides 8% DV of this nutrient.  Riboflavin has been associated with the prevention of cervical cancer, migraine headaches, and cataracts.  It may also help increase energy levels, boost immune function, maintain healthy skin and hair, boost athletic performance, and help prevent memory loss.

Vitamin B6.  Also known as pyridoxine, 4% DV of this vitamin can be found in a serving of coconut water.  While many people are mildly deficient in B6, increasing intake is important as it helps support nervous function, promotes proper breakdown of sugars and starches, and prevents homocysteine build-up in the blood, a condition linked to cardiovascular disease.  It is also used in the treatment of anemia.

Calcium.  A cup of coconut water can also provide 6% DV of calcium, a mineral important for forming healthy teeth and bones.  Calcium also aids in heart, muscle, and nerve function, helps with blood clotting, nerve signaling, and muscle contraction and relaxation, and is needed for the release of hormones and regulating heartbeat.

Coconut water is lower in sodium than sports drinks, with one ounce of coconut water providing 5.5 mg of sodium compared to the 13.8 mg found in a beverage like Gatorade.

It’s also lower in calories than sports drinks, mainly due to the lower sugar content.  A serving of coconut water has 45 calories and 6g of sugar versus the 63 calories and 14g of sugar found in the typical sports beverage.

In addition, sports beverages typically have no fiber, and little to no vitamins or minerals.  An 8oz. serving of orange-flavored Gatorade provides only 35mg of potassium (compared to the 600mg found in coconut water), and 0% DV of vitamins and minerals.

A 2012 study published in the International Society of Sports Nutrition also showed coconut water offered similar performance and rehydration benefits as sports beverages for exercise, though individuals who engage in extreme high-intensity activity may benefit from a beverage with more sodium.

Differences Between Fresh vs. Packaged

Fresh coconut water comes from young, green coconuts, not the brown, hairy, mature ones we often picture when we think of coconuts.  Studies have shown that the age of the coconut affects the nutritional value of the water.  For example, coconut water from a young coconut up to 7 months old has more sodium and glucose than a coconut that is 8 months old or older – essential nutrients for those looking to rehydrate.

In the same way, storage and processing methods also affect the composition of coconut water.  Canned, packaged, or bottled coconut water is generally flash pasteurized to make it safe and shelf-stable, but this process can affect the nutrient content and flavor.  The type of packaging may affect flavor, too, since a can may impart a metallic taste to the juice.

Some packaged varieties also have added sugar, sodium, and/or flavorings.  Ingredients like cane juice are, in fact, sugars added to make the coconut water taste sweeter.  Tropical juices such as pineapple, passion fruit, and mango are also popular additions to plain coconut water for both taste and variety; however, these can add up to 20 or more calories per serving.

Another issue to be aware of is that the nutritional values on the label may not always accurately reflect of the nutritional content of the juice in the package.  Independent studies have found that some major coconut water brands have had problems with the product not providing the nutritional benefits they touted, prompting better quality control and more careful labeling.

Vita Coco. One of the most visible brands of coconut water on the market today, Vita Coco comes in a variety of flavors and sizes packaged in a juice box.  Fans find the flavor to be a little sweeter than other brands and fresh-tasting, with a bit of a floral fragrance.  This brand lists “less than 1% natural fruit sugar” and vitamin C as added ingredients.  An 8 oz. serving of unflavored coconut water contains 45 calories, 30 milligrams sodium, 11 grams carbohydrate, 11 grams sugar, and 470 milligrams potassium, but the container provides two full servings.

Zico. One of the brands found to have accurate nutritional labeling, Zico is another popular coconut water purveyor.  It comes in both juice boxes and bottles in a variety of flavors from the usual tropical fruits to more interesting flavors such as chocolate and latte.  An 8 oz. serving of the “Natural” version contains 34 calories, 91 milligrams sodium, 7 grams carbohydrate, 7 grams sugar, and 324 milligrams potassium.  The bottles come in at 14oz., however, so monitor your consumption carefully.

Naked. The popular Naked Juice line also offers a juice box coconut water with no additives.  It lists “one coconut” from Brazil as its ingredient, and reviews on taste vary from sweet to somewhat savory.  An 8 oz. serving contains 43 calories, 14 milligrams sodium, 10 grams carbohydrate, 8 grams sugar, and 462 milligrams potassium.  The box is actually 11.2 oz., so expect 60 calories, 20 milligrams sodium and 14 grams of carbohydrate.

Koh. This brand boasts that its juice comes from young Thai coconuts, the best “perfume coconuts” in the world.  Packaged in juice boxes, reviews find the taste to be “as coconut water should taste,” sweet, and having a “vanilla-like scent.”  An 8 oz. serving contains 50 calories, 50 milligrams sodium, 13 grams carbohydrate, 8 grams sugar, and 530 milligrams potassium.

C2O. A popular brand that also sources its coconuts in Thailand, C2O is also 100% coconut water with no additives.  Tasters find this brand to be noticeably sweeter than most other brands.  An 8 oz. serving contains 50 calories, 66 milligrams sodium, 13 grams carbohydrate, 11 grams sugar, and 293 milligrams potassium.  Watch out for serving size, as each can is 2 full servings.

O.N.E. Made from young Brazilian coconuts, O.N.E. offers a variety of flavors including mango, guava, and pineapple.  Reviewers find this brand to be less sweet than other popular brands.  An 8 oz. serving contains 43 calories, 43 milligrams sodium, 11 grams carbohydrate, 10 grams sugar, 0 grams protein, and 476 milligrams potassium.  The small package, however, is actually 11.2 oz., so expect 60 calories and 15 grams of carbohydrate.

Does this mean that we’ve found a water replacement?  Absolutely not!  Water is an essential need, and it helps in saliva production, helps transport nutrients and oxygen to cells, helps lubricate joints and cushions organs and tissues, carries waste out of the body, and helps remove body heat in the form of sweat. We’re constantly losing water, so we need to keep replenishing it, and while we can get water from other sources, plain water is the best.

Remember – water has no calories, no added sugar, does not have the potential for digestive distress that a rare number of people might experience with coconut water, and it’s (mostly) free!  Drinking more of it may even help with weight loss, since our bodies sometimes mistake thirst for hunger.

So while it may not be a replacement for plain old drinking water due to the added calories and sugar, it’s certainly a viable option after a workout.  It’s also nice that it’s all natural and refreshing with a delicious, nutty flavor.  If you’re going to splurge, compared to other, more sugary beverages, coconut water is an excellent choice!

What’s in Your Water?

How to Exercise Safely in the Heat

Reducing Sodium Intake Could Save Billions 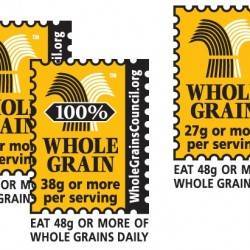 The Whole Scoop on Whole Grains