Men taking vitamin E supplements had a 17% increased risk of developing prostate cancer, according to a new study published in the Journal of the American Medical Association (JAMA).

This finding raises a concern for the more than fifty percent of men age 60 and older taking supplements that contain vitamin E.  But, before pitching your daily multi-vitamin or vitamin E supplements, it makes sense to take a closer look at the study design and results.

One of the reasons why researchers selected vitamin E and selenium for their research was based on observational studies, epidemiological studies and clinical trials demonstrating that these supplements helped to reduce prostate cancer risk.

For example, findings from the 1998 Alpha-Tocopherol Beta Carotene Cancer Prevention Trial (ATBC) showed that Finnish smokers who took vitamin E had 32% fewer cases of prostate cancer.  However, the researchers were not sure if this observation was due to chance as the study was designed to examine the relationship between antioxidant intake and lung cancer.

In the 1996 Nutritional Prevention of Cancer (NPC) study, researchers followed 1,300 men and women who had a history of non-melanoma skin cancer. While selenium supplementation did not prevent new skin cancers from developing, men taking this mineral had 60% fewer new cases of prostate cancer.

The Selenium and Vitamin E Cancer Prevention Trial (SELECT) was designed to determine the long-term effect of supplementation with vitamin E and selenium in healthy men on risk of prostate cancer.

Over 35,000 men from the U.S., Canada and Puerto Rico participated in the trial.  At the start of the study in 2001, participants had to be healthy and age 50 years for black men (due to their increased risk of prostate cancer), age 55 for all others.  The men were advised to visit their doctor as usual and follow contemporary community standards of screening and biopsy for prostate cancer.

The men were randomly divided into four groups, receiving one of the following daily regimens: selenium only (200 mcg); vitamin E only (400 IUs of vitamin E in the form dl-alpha-tocopherol acetate); selenium and vitamin E (200 mcg, 400 IUs) or placebo.  The follow-up was planned to range from a minimum of 7 years to a maximum of 12 years.

In September 2008, after about 5.5 years of follow-up, the study data showed that selenium and vitamin E, taken alone or together, did not prevent prostate cancer.  During this initial follow-up period, a total of 1,758 cases of prostate cancer were diagnosed with a low of 416 cases in the placebo group and a high of 473 in the vitamin E group.  Although this equated to a 13% increased risk of developing prostate cancer in the vitamin E group, this result was not considered statistically significant (meaning it could have been due to chance).

Based on these findings, study participants were told in October 2008 to stop taking their supplements. The men continued to be studied from October 2008 until July 2011, which lead to the most recent SELECT findings.

Since the initial report, an additional 521 cases of prostate cancer were diagnosed:  143 in the selenium only group, 147 in the vitamin E group, 118 in the combination group and 113 in the placebo group. These numbers were statistically significant in the vitamin E only group, correlating to an increased risk of 17%.

In practical terms, this means for every 1,000 men who take vitamin E, 76 would be projected to get cancer compared with 65 if they were taking a placebo.  The elevated risk of developing prostate cancer was consistent regardless of whether the men had a low or high-grade of the disease.

Researchers are not certain why men in the vitamin E group had a higher risk of developing prostate cancer.  Urologist Neil Fleshner of Princess Margaret Hospital in Toronto thinks the raised risk was merely “statistical”.  “I don’t think it’s cause and effect,” says Fleshner.  “Many other studies have looked at this question and not shown that.”

An important finding was that men in the selenium/vitamin E group did not have higher prostate cancer risk, indicating that the addition of selenium dampens the risk of vitamin E alone.  Additional analysis of vitamin E and selenium levels in study participants will be conducted to better understand this relationship.

Based on the SELECT trial where do we stand regarding vitamin E supplementation?

Whenever new study results are published, one of the first things to examine is how the new information adds to the existing body of research.  A number of other well-designed studies have shown that vitamin E supplementation offers health benefits.  For instance, in the ATBC trial described above, participants had a 35% risk reduction for prostate cancer taking 50 IUs/day of vitamin E for 6 years.  In the Physicians Health Study II (a long-term study following physicians), participants who took 400 IUs of vitamin E every other day for 8 years had no increased incidence of prostate cancer.

It is not unusual for clinical studies, (whether conducted on drugs or nutritional supplements) to show divergent findings.  It is important to pay careful attention to the details of each study. For example, the SELECT trial used 400 IUs of dl-alpha-tocopherol acetate.  The “dl” signifies that the type of vitamin E used was synthetic.  The “alpha” indicates that just one member of the vitamin E family was used.  Vitamin E is not one single compound; it includes 8 members (4 tocopherols and 4 tocotrienols).

While synthetic vitamin E is less costly than the natural form, studies have demonstrated that the natural form is more readily absorbed and assimilated by the body.  With vitamin E supplements, providing all eight members of the family, in the natural form is preferred.  This is the approach utilized in VitaMedica formulations.  All of our multi-nutrient formulas (Energy Support, Bone Support, Multi-Vitamin & Mineral, Anti-Aging Formula, Essentials Formula), use a natural mixed tocopherol and tocotrienol blend.

An additional finding from the SELECT trial is that the group taking the combination of selenium plus vitamin E did not have increased prostate cancer risk.  This reinforces the idea that nutrients work in concert with each other and often have synergistic effects.  VitaMedica has always formulated supplement products containing moderate doses of a wide range of nutrients as opposed to large doses of a singular nutrient. VitaMedica’s Multi-Vitamin & Mineral is formulated with 105 IUs of vitamin E.  This compares with 200-400 IUs of vitamin E that is commonly found in other multi-vitamin brands.

Prostate cancer is the most common non-skin cancer in American men with a current lifetime risk of 16 percent.  In 2011, it is estimated there will be 241,000 new cases of prostate cancer and 34,000 deaths from this disease. We urge you to stay informed about this common disease and not be swayed by headlines which are designed to be sensational with over-simplified messages. For more information, visit the Prostate Cancer Foundation’s website or the American Cancer Society’s website. 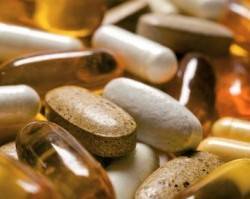