Eggplant – A Vegetable or a Fruit? | VitaMedica 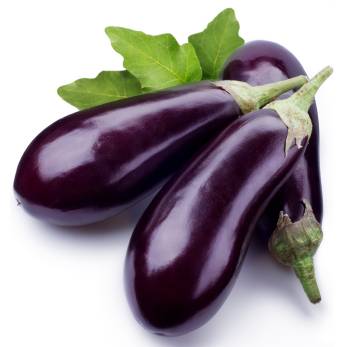 Prepared as a culinary vegetable but really a fruit, eggplant is classified as a berry because it contains small, edible seeds.

Eggplants belong to the nightshade family which also includes potatoes, tomatoes, paprika, cayenne pepper and other colorful foods.  Tobacco and the poisonous belladonna and some other toxic plants are also part of the nightshade family and may explain in part the origin of the family name.

Although we associate eggplants with a deep, glossy purple color, this fruit comes in lavender, green, orange and yellow-white.  Eggplants also vary in size but their bitter taste and spongy texture is common across the different varieties.

Eggplant is native to India where it grew wild. In the 5th century B.C., it was first cultivated in China. Before the Middle Ages, eggplant was introduced to Africa and then to Italy shortly after.  Centuries after eggplant  spread throughout Europe and the Middle East, European explorers introduced the plant to the Western Hemisphere.  Today, the leading cultivators include Italy, Turkey, China and Japan.

The phytonutrients found in eggplant include phenolic compounds, such caffeic and chlorogenic acid and flavonoids such as nasunin. The benefits attributed to these compounds include antioxidant and antimicrobial.   Phenolic acid gives eggplant its bitter taste and causes it to turn brown after it has been cut.

It is advisable to avoid foods of the nightshade family if you suffer from arthritis or other bone and joint problems. This family of foods contains solanine, a calcium inhibitor, which can enhance mineral imbalance and cause swelling of the joints.

Individuals with allergies or other hypersensitivities, should stay away from eggplant as this plant contains high levels of histamines and an allergic reaction may occur if consumed.

Eggplants can be purchased all year around; however, eggplants are best when they are in season which is between August and October.

While selecting, look for a firm and heavy eggplant. The exterior should be a rich color (depending on the type of eggplant) with a shiny skin.  In addition, the stem and cap of the eggplant should be bright green.  Avoid eggplants that contain bruises or marks. This type of discoloration indicates decay or damage to the interior flesh. To test if an eggplant is ripe, press the skin with the pad of your thumb. If the skin bounces back, the eggplant is ripe.  Try to avoid eggplants that have been waxed.

Eggplants are very perishable; therefore, they must be enjoyed soon after they are purchased or stored right away.  Do not cut eggplants prior to storing as it will damage the flesh. Instead, cut the eggplant when it is ready to be eaten. Due to sensitivity to both cold and heat, store the uncut, unwashed eggplant(s) in a plastic bag at a temperature of 50 degrees Fahrenheit.

Eggplant can be baked, roasted or even steamed.  It is often stewed, as in the French ratatouille (zucchini, bell peppers, onions, garlic, tomatoes, and herbal seasonings) and the Greek moussaka (a layered casserole featuring sliced eggplant, lamb, and béchamel sauce) or baked with tomato sauce and cheese to make Eggplant Parmigiana.

To boost the nutritional content, pair eggplant with other vegetables such as tomatoes, onions, and peppers.  Prior to baking, pierce the eggplant with a fork to prevent it from exploding in the oven.

To remove the bitter taste and make the eggplant less permeable to absorb oil during cooking, sprinkle the washed and cut eggplant with salt and allow to sit for about thirty minutes.  Rinsing thoroughly after soaking eliminates the salt.

The name eggplant comes from the 18th century when European cultivars were yellow or white in color and resembled goose eggs.  Eggplant is richer in nicotine than any other edible plant.