It’s well-known that not getting enough sleep can contribute to weight gain, but that fact raises a number of questions.

How much sleep is enough sleep?  How much is too much?  Does sleep quality matter? And does when we go to sleep affect us?  Fortunately, a new study provides some answers to these long-held questions.

The study published in the American Journal of Health Promotion suggests that keeping a consistent sleep routine may help maintain a healthier body weight.

Researchers from Brigham Young University in Provo, Utah, analyzed data on 330 young women between the ages of 17 and 26.  The study participants were all students who attended two major Western U.S. universities.

“The ideal amount of sleep ranged between 8 and 8.5 hours per night and was associated with lower body fat.”

At the beginning of the study period, the women were assessed for body composition.  They were then given activity trackers to record their movements during the day as well as their sleep patterns at night, and the results were recorded over a period of one week.

The study findings revealed that:

The most surprising result was that participants who woke up at the same time every day had the least body fat.

Researchers suggest that consistent sleep patterns are likely associated with good “sleep hygiene.”  They also believe that altering sleep hygiene likely has a domino effect on physical activity and the hormones involved in metabolism, resulting in a rise in body fat levels.

While further study is needed to see whether results would differ in men or in an older population, they hope the study will result in “efforts to promote adequate sleep (7 to 8 hours) and consistent sleep patterns,” particularly for those in college for whom “sleep is often a casualty of trying to do more and better and is often sacrificed.”

Before you set your alarm to go off at 6:00AM on the weekend, know that there’s probably more to this study than just adjusting your bedtime and wake time.

For example, those who have more consistent sleep schedules may also be more likely to exercise, eat healthfully, and follow a healthy routine throughout the week.  This constellation of behaviors could contribute to individuals having a lower body fat percentage rather than just sleep habits alone.

Regardless, most Americans could benefit from getting more sleep, as more than 20% of Americans report getting less than 6 hours of sleep every night.

Whether you’re trying to maintain your waistline or restore your body, here are a few tips from the National Sleep Foundation to help you sleep better at night:

Better sleep can lead to better bodies, so sleep tight and feel right! 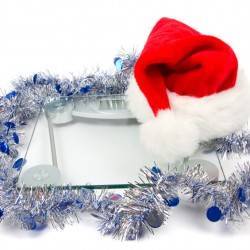