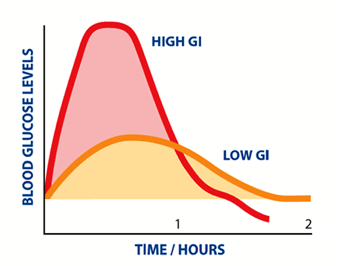 With almost twenty percent of daily caloric intake attributed to refined sugars, Americans are consuming too many simple carbohydrates. This has major health implications and researchers believe that the rise in obesity and type 2 diabetes over the past twenty years is attributed to increased sugar consumption. The Glycemic Index (GI) was developed by researchers so that carbohydrate quality can be assessed and individuals can make better food choices.

What is the Glycemic Index?

Carbohydrates are broken down into glucose which is then released into the blood stream. In response, insulin is secreted by the pancreas which allows the body’s cells to uptake the glucose. The extent to which blood sugar levels rise and fall again depend on the type of carbohydrate eaten. From a health perspective, the body performs best when blood sugar is kept relatively constant.

The Glycemic Index (GI) was developed by Jennie Brand-Miller and her associates at University of Sydney as a method for classifying carbohydrate-containing foods. Although the GI is used widely in Australia and in Europe, it is not widely referenced on nutritional labels for food products in the U.S.

The Glycemic Index is ranking of carbohydrates on a scale of 0 to 100 according to how quickly they’re digested and the extent to which they raise blood sugar levels after eating. To determine a food’s GI rating, a measured portion of food containing 10 – 50 grams of carbohydrate are fed to 10 healthy people after an overnight fast. Blood samples are taken every 15-30 minute intervals over a period of hours. The average of the GI ratings is compared to a reference food (same amount of glucose) and multiplied by 100 to give a GI rating. Foods are then classified as being low GI (55 or less), medium GI (56-69) or high GI (70-99).

Low Glycemic Index foods contain slowly digested carbohydrates which cause blood sugar levels to rise more slowly. Most vegetables have a low glycemic index. Although fruits tend to be sweeter and therefore have a higher GI, their fiber content helps to slow the release of glucose into the bloodstream. This makes them a better alternative to fruit juices which elevate blood sugar levels more rapidly.

A diet high in carbohydrates, especially refined or simple sugars, subjects the body to spikes in glucose. In response, the body secretes more insulin and glucose levels plummet. Over time, the body’s ability to keep pace with an increased glucose load is more difficult. As a result, cell’s become insulin-resistant – or unable to use circulating insulin to uptake the glucose. This so-called pre-diabetic state, if not taken care of, can lead to diabetes, a chronic disease with major health consequences.

Recent scientific evidence has shown that individuals who follow a low GI diet over many years were at a significantly lower risk of developing both type 2 diabetes and coronary heart disease. High blood glucose levels or repeated glycemic spikes following a meal may promote these diseases by increasing oxidative damage to the vascular system and also by the direct increase in insulin levels.

What is Glycemic Load?

Glycemic Index is a great tool to measure the effects of certain foods on glucose blood sugar levels, but GI is deficient in measuring other types of sugar – such as the fructose contained in high fructose corn syrup, one of the most common artificial sweeteners found in many foods.

It’s difficult to use GI to predict an individual’s glycemic response, as many variables can alter the way an individual reacts to a food with a specific GI; including blood glucose levels, how the food is prepared and stored, insulin resistance and the way that a mixed meal digests.

While the Glycemic Index and Glycemic Load are useful tools to predict how carbohydrate consumption might affect blood sugar levels, they don’t encompass the broad range of the typical American diet. Many foods do not yet have GI values, and manufacturers are not required to make GI information available to consumers.

What Can You Do?

By making small dietary changes, you can still enjoy food without feeling deprived.

– Fruits and vegetables provide excellent nutrition because they are loaded with vitamins, minerals, antioxidants and phytochemicals. In addition, their high fiber content helps to release glucose more slowly, which provides more sustained energy.

– Replace your morning bagel with a bowl of fruit and yogurt. Top with a small handful of ground flax seeds or granola to add crunch.

– Substitute a pasta lunch with a salad topped with lean chicken or grilled fish.

– When dining out, replace a starch like rice or potato with an additional vegetable. Most restaurants are accommodating to the dietary needs of patrons.

– Make sweets or desserts the “accent” and fruit the “hero”. Enjoy a bowl of blueberries, strawberries, and blackberries with a small piece of dark chocolate.

A Healthy Heart in Your 60s & Beyond

Osteoporosis: How Often Should Women Be Screened?